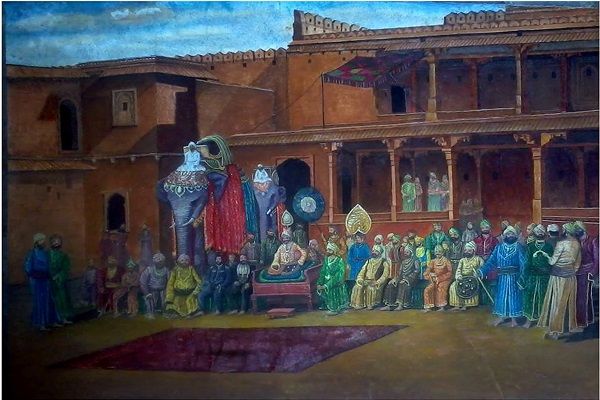 Ancient Indian art has been deeply influenced by religion. All the motifs in Indian paintings of the bygone era were based on mythological stories and folklores. The wide range in diversity and culture gave artists an array full of various subject matter for Indian paintings to depict.

Indian art of sculpture making owes credit for its majestic splendor to religion. Temples of Brihadweshara and Thanjavur are a sight to behold. The sculptures in rock-cut temples of Ajanta and Ellora are world-famous for their exquisite beauty and glory. But, in order to understand what lies behind the cryptic and symbolic icons of these marvels of art, one has to keep his eyes peeled for things that are not open to naked eyes but to the eyes of a spiritually awakened being.

Indian art is filled with hidden patterns for us to decipher. So, let us try to understand the true meaning behind the subject matter of Indian paintings:-

What is the Importance of Nine Figures in Maa Durga in Indian Paintings? 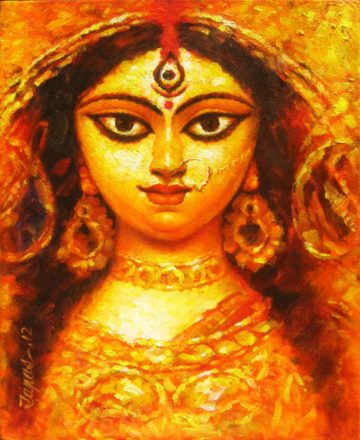 Devotees pray to different forms of Maa Durga for various boons who is the avatar of Adi-Shakti or the supreme power that breathes life into existence. Here are the nine forms which are featured in paintings of Maa Durga:-

It means the daughter of the mountains. She is also known as Hemputri, Hemvati, Parvati, and Sati. Her vehicle is Nandi, the bull. Devotees perform rituals to please her and grant them the power to always remain by the side of Satya or righteousness.

Generally, students perform Pooja to please her so that she gives them the power of knowledge and wisdom. She adorns a white sari with a rosary in one hand and Kamandala in the other. It signifies that truth can’t be attained without pursuing knowledge.

She is worshipped on the third day of Navratri. She is the destroyer of evil and grants physical and mental strength to devotees who pray to her. She wears a crescent moon on her head shaped like a bell.

The divine form of Devi loves Kushmand or white pumpkin. It is believed that the universe was created because of her smile. She bestows strength and vigour to her devotees.

She is the mother of Lord Kartikeya who is the God of war. He is the Senapati or general of the divine forces. He also goes by the name of Skanda. She is the bestower of prosperity and motherhood.

She is the daughter of sage Katyayana who gave her form. It is believed that she is another form of Goddess Durga who killed Mahishasura.

She is feared by all. Her ferocious form destroys all the evil forces like Ghosts, goblins, etc. who try to create hurdles in the life of her devotees.

The white-skinned Goddess was transformed into her present form from Kaali when she performed severe penance to get her complexion back. She grants all the wishes of her devotees.

Planet Ketu or the south node of the moon forces people to face hurdles so that they could overcome the materialistic pleasures to understand the true meaning of spiritualism. Whoever worships this ninth form of the Goddess, Ketu goes soft on him. She is the bestower of Siddhi or expertise.

Why does a Bull Guard Lord Shiva’s Abode?

Nandi is one of the Ganas of Lord Shiva. He is also his vehicle. Archaeological excavations from the Harappan civilizations have found seals that had the imprints of a Bull and their god Pashupatinath who is believed to be a form of Lord Shiva. From ancient times, a Bull signifies righteousness. In different mythologies that emanated from the Indo-European culture, the role of a bull has never changed.

Shiva rides the bull. This means that Shiva is the ultimate truth, the destroyer of lies. It is also pertinent that Shiva is associated with all the animals. He is the god of animate and inanimate things, living beings and ethereal beings, man and animals. That is why he is Pashupatinath or the deity of animals.

Why do we chant ‘OM NAMAH SHIVAAY’?

Om is the symbol of infinity. Nothing is above and beyond this primordial frequency. Many countries are conducting research in tapping the true power and potential of this word. It has some metaphysical meaning attached to it. When we chant OM, the symbol through which we depict Lord Shiva, it streamlines everything in our body. It clicks the positive force that is responsible for maintaining the physical and mental strength.

So, it is important to get acquainted with the culture and true meaning of these religious Indian paintings behind something to incorporate good things in life.

« 10 Tips for Entrepreneurs on Starting a Business What is Content://com.android.browser.home/ – How Set Default Browser »